Visually Evoked Potentials (VEPs) are used to investigate conduction along the visual pathway. They may be used to quantify and follow progression of nerve pathology, localize lesions and measure slow –downs for multiple reasons such as: compression, inflammation, demyelination, or trauma.

A VEP is recorded using a scalp electrode(s) placed over the occipital lobe of the brain. Most clinical-use VEPs are performed with a single electrode placed over the midline at Oz. This central electrode picks up signals from the combined hemispheres at the visual cortex. This is called a 1-channel VEP. Another option is to use three occipital electrodes for a 3-channel VEP. The 3-channel option involves electrodes on the midline, and the left and right hemispheres of the visual cortex at O1 and O2. With the 3-channel electrode placement, it is possible to detect optic nerve misrouting and determine whether a lesion is located at or posterior to the chiasm.

VEP interpretation should always be done in the context of other clinical findings. Pattern VEP abnormalities usually require exclusion of macular causes; while Flash VEP abnormalities should exclude retinal causes through full-field ERG.

VEP stimuli can be either flashes or patterns. Each is suitable for different types of patients.

Pattern Reversal VEP is commonly used for patients who have good central vision and an ability to fixate. It utilizes the central 15 degrees of visual field.

This is a monocular test that presents a black/white checkerboard pattern. True to its name, this protocol reverses, or alternates, at a rate of 2 reversals / second. It includes different check-sizes, usually 1 and 0.25 degrees. Patients with normal acuity (20/20 or 6/6) have large amplitudes and fast response time to the smaller checks, while patients with lower visual acuity will score higher amplitudes and faster latencies on the larger check-size.

This test has the least degree of inter-subject variability, both in timing and in waveform morphology, making it is the most commonly performed VEP test. Since it is primarily driven by the contrast between the black and white checks, patients with very low visual acuity may require alternate methods of testing, such as Flash VEP.

Pattern Onset/Offset VEP is an alternative to Pattern Reversal for patients who struggle to maintain central fixation, such as those with Nystagmus. This test is also suitable for patients whose visual acuity is in the range of 20/200 to 20/400 (6/60-6/120).

Flash VEP should be performed on anyone unable to fixate, including patients under anesthesia. The stimulus is a series of 100 flashes of white light whose responses are averaged to form a final waveform. This test is also ideal for patients with very low visual acuity.

Sweep VEP is a measure of Visual Acuity (VA) and is discussed in a different section. https://www.diagnosysllc.com/sweep-vep/ 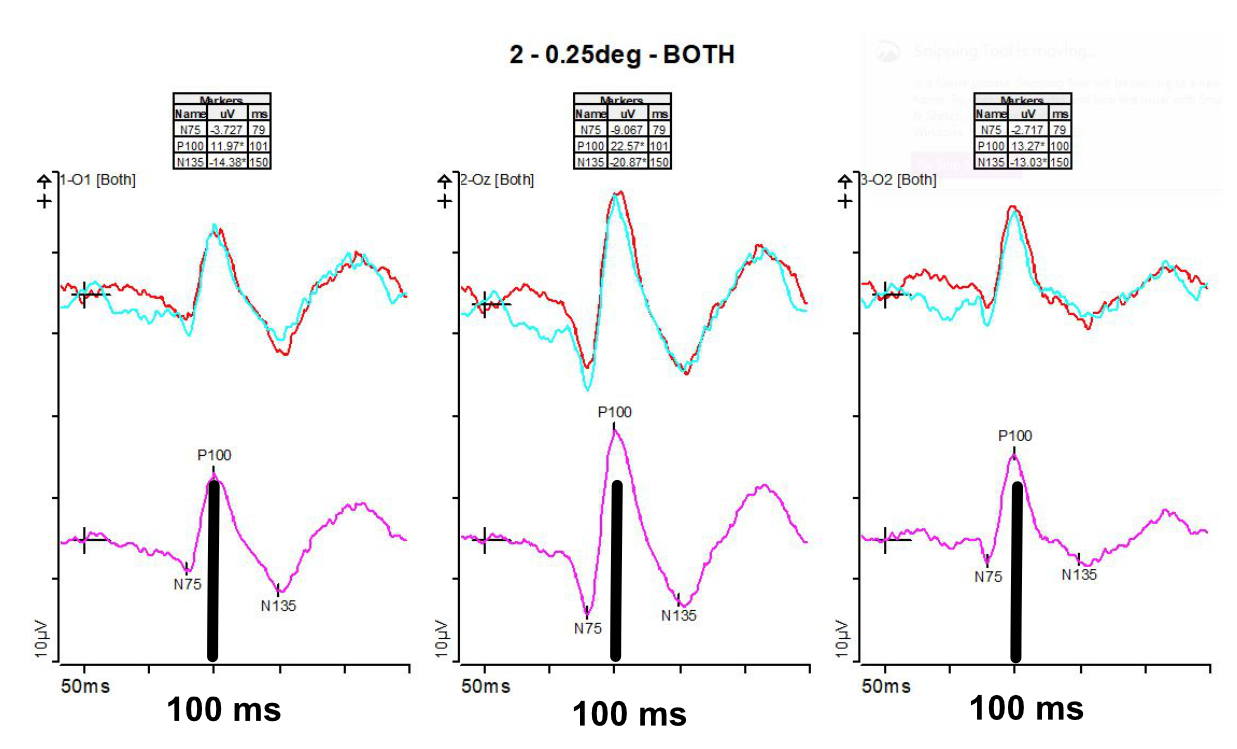 A series of negative and positive peaks with N2 around 90ms and P2 at 120ms.

In this case, the VEP is completely flat without any clear P100 component. 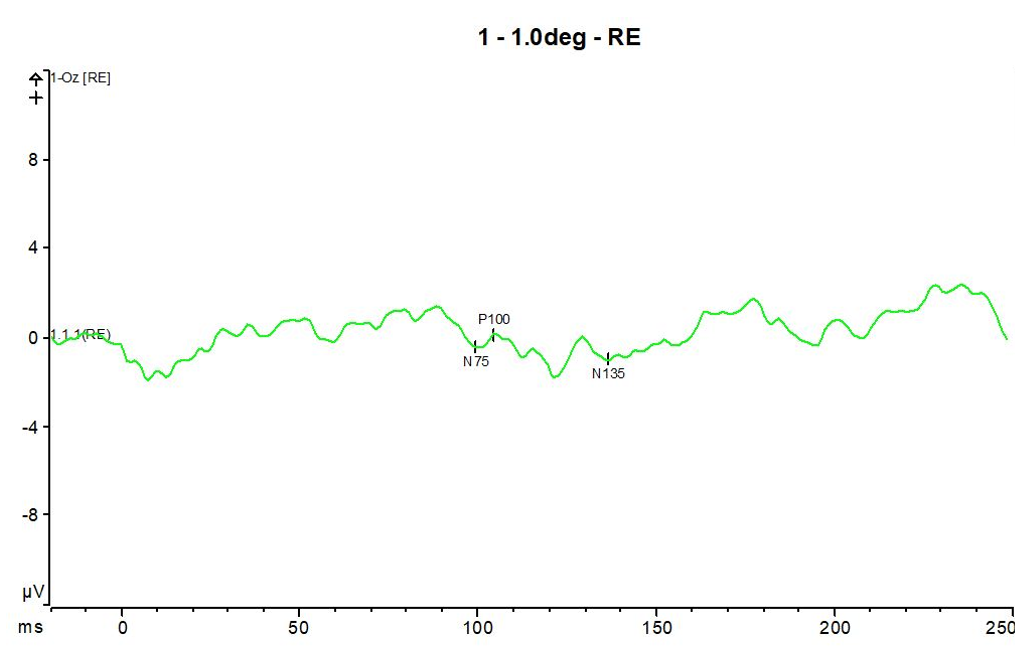 Demyelination is causing the P100 to significant slow down to about 120ms.