Sweep VEP is an objective method to estimate a person’s visual acuity. This test is useful for patients with unexplained vision loss or any adult / child who is unwilling or unable to perform a subjective acuity test.

Similar to a 3-channel VEP, Sweep VEP utilizes three active scalp electrodes: one on the midline of the visual cortex (Oz) and one on each hemisphere (O1) (O2). The patient fixates on a low luminance checkerboard pattern-onset stimulus that alternates between a light-gray checkerboard pattern and a uniform gray screen. A gray, 40% contrast is used rather than a high-contrast black in order to produce smaller amplitude responses, which are easier to ‘drive to zero’.

The key to the Sweep VEP is the stepwise spatial frequency regression that reduces the check-size (spatial frequency) gradually over the course of 6 steps (stepwise regression), per eye. To measure the visual acuity, the protocol is designed to drive the VEP amplitude to zero (or regress magnitude to zero). In other words, the goal of this protocol is to make the check sizes so small that a person can no longer differentiate between gray/white on the screen; at which point, the estimated visual acuity can be calculated.

Diagnosys software incorporates Michael Bach’s visual acuity method. This method takes the three VEP (Oz, O1, O2) signals and converts them into a fourth Laplace signal. The Laplace signal then undergoes a Fourier Transform to distinguish signal from noise and yield a single magnitude value. A single magnitude value is calculated for each step of the protocol, 6 for RE and 6 for LE. These values are plotted on the Sweep Plot, and an algorithm finds the tuning curve of linear fit that theoretically crosses the x-axis at zero. The point at which this curve crosses the x-axis translates as the final visual acuity estimate.

Because there is a very broad range of visual acuities across the human population, Diagnosys has divided the Sweep VEP protocols into three categories: Normal, Low Vision and Very Low Vision. Each category corresponds with its own spatial frequency / stimulus range.

An example of a response with a strong signal. Notice the consistency across the 3 occipital channels and the sharp appearance of the Laplace signal. 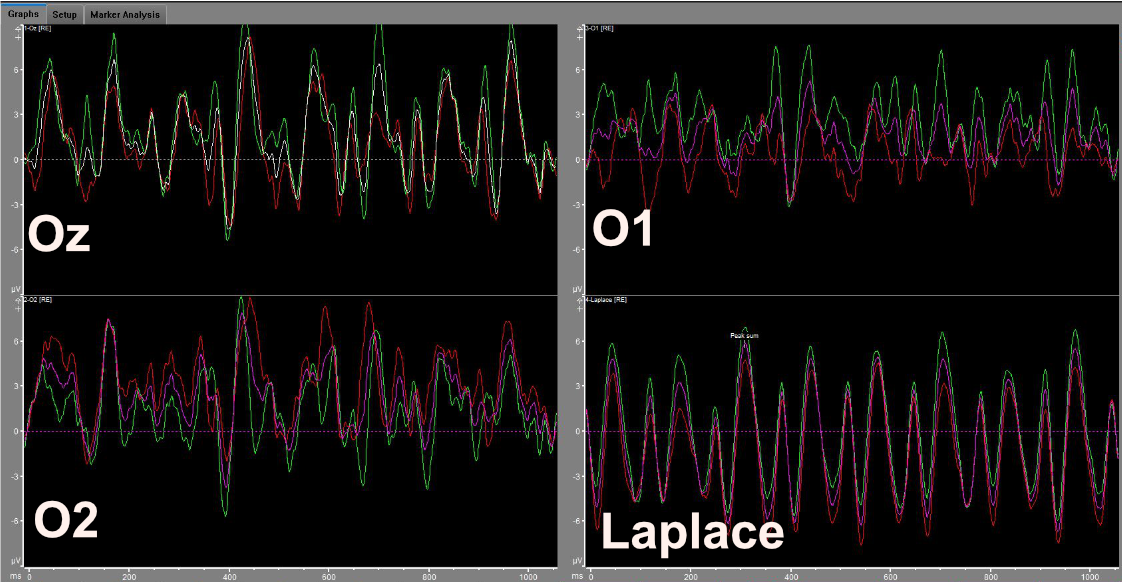 A response with more noise than signal. It is unclear whether the patient can reliably see the check size on the monitor. Notice the irregularities between the recordings for each of the 3 occipital channels. The Laplace signal is nearly flat and without consistent peaks. 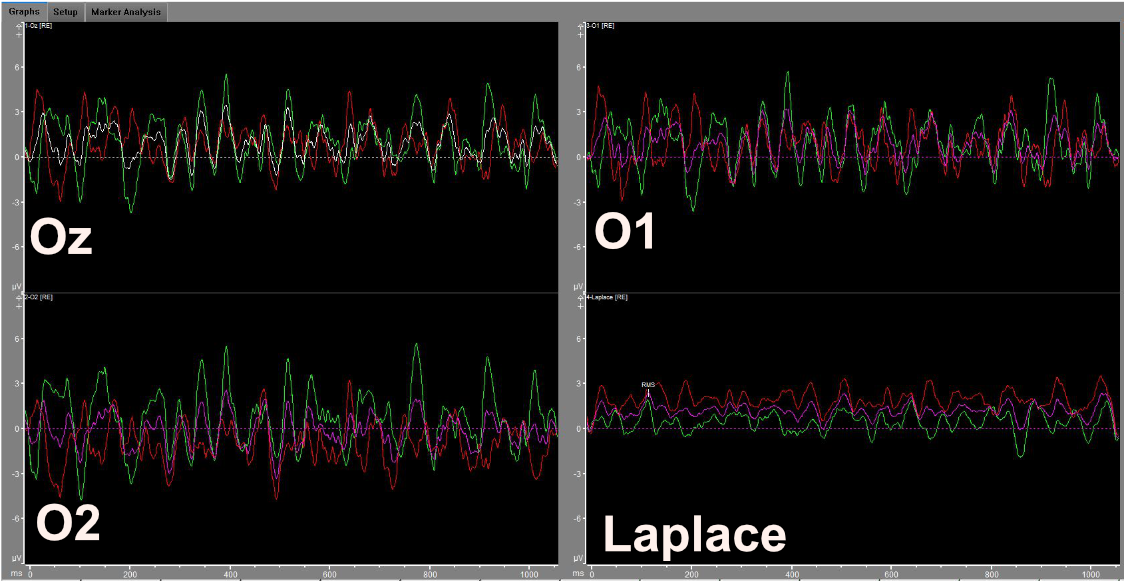 A final Sweep VEP graph for each eye. There is a characteristic “notch” shape to the graph followed by significant data points. (Significant data points are those whose signal-to-noise ratio is above the minimum requirement.) Notice how the linear fit intersects the x-axis yielding an automatically calculated estimate of visual acuity.