An electrooculogram (EOG) measures the resting potential of the retinal pigmented epithelium (RPE) in response to dark and light conditions. A foundational principle of this test is the potential difference between the front and the back of the eye. The retina lining the back of the eye is more negative due to the neurons and ion channel activity, thus creating a negative pole. The EOG measures the resting potential by placing electrodes on the nasal and temporal canthi to measure the voltage swing as the patient moves their eyes move left to right following a single LED stimulus. As the eyes moves in 30-degree horizontal saccades, we record a square wave whose amplitude corresponds with the voltage of the eye. This process is performed in both dark and light conditions because the voltage changes with exposure to light. The final EOG calculation is known as the “Arden Ratio” which is a simple comparison between the eye potential in the dark over its potential in the light. A normal Arden Ratio is around 2.0, anything lower than 1.8 is considered to be abnormal.

Notice the difference between the dark and light phases for this normal patient. You can see how the eye’s voltage decreased with prolonged time in the dark (1-15 minutes). As the lights come on the voltage increases significantly (15-30 minutes). A line of best fit is rendered to match the data points, and an Arden Ratio is calculated by using the lowest trough and highest peak values. 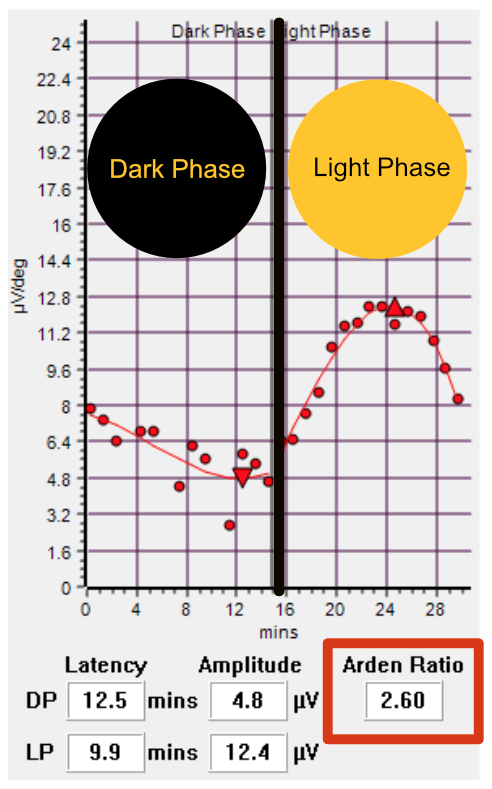 The relatively flat line represents an unchanging voltage from the dark to the light phase of the exam resulting in an Arden Ratio close to 1.0. The absence of a light peak is a characteristic sign of Best Disease. 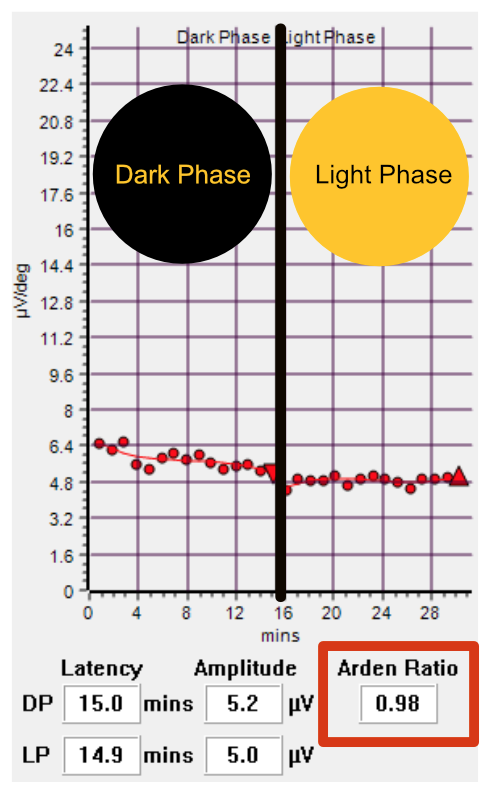