The dark-adapted red flash is an extension of the standard full-field ERG. It incorporates a dim red flash of light which elicits an x-wave that illuminates further detail of the rod pathway physiology.

This protocol can be used in the diagnosis of achromatopsia (rod monochromacy), cone dystrophy, and other cone system dysfunctions. They are apparent when the x-wave is preserved in the absence of a normal response to standard light-adapted ERG. This protocol can also be used for patients with severe rod dysfunction. The origin of residual dark adapted ERG waves may be explained in cases of vitamin A deficiency, fundus albipunctatus, Oguchi disease, and rod-cone dystrophies.

The stimulus is a dim, red flash that can be done with any Diagnosys Ganzfeld Stimulator: ColorDome, ColorBurst, and ColorFlash. The Diagnosys pre-made protocol utilizes a single 0.3 cd.s/m2 intensity of light. This protocol may be run prior to the standard full field ERG. Another option is to create a dim red dark-adapted series, if necessary.

A normal DA red flash ERG response indicating an x-wave in between standard a- and b-waves. 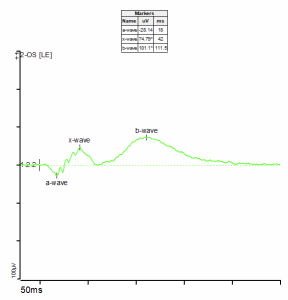